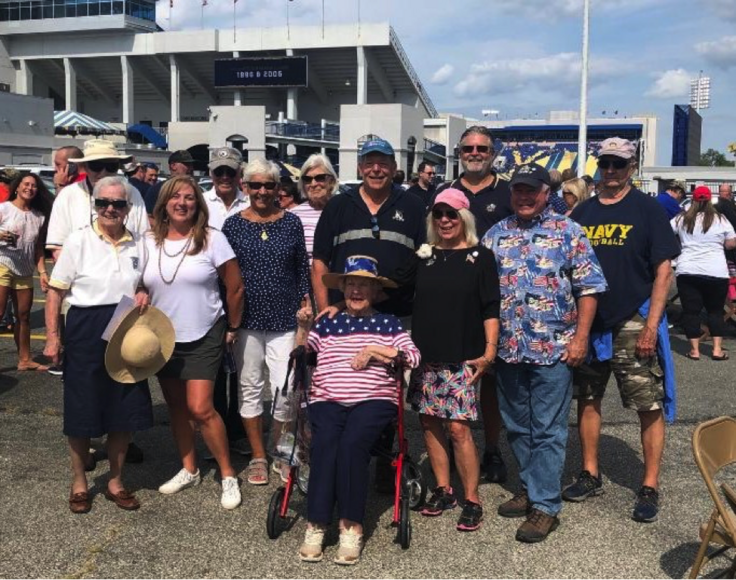 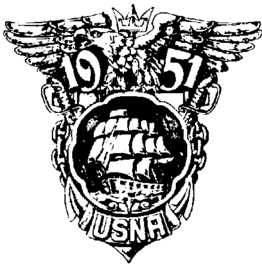 As reflected in the Necrology, since the last edition of this website, we lost three classmates and two of our ladies. On 1 September it was Bill Surman, on 4 September, Frank Conlon and on 8 September, Ralph Morehead. The ladies were Virginia Valora Vandegrift Black, widow of Don Black and Lois Ann Johnson, widow of Alfred (Bill) Johnson. Obits for the men will appear in a forthcoming edition of Shipmate.

On a happier note, with the fall comes football season and – thanks to Ruth and Bob Small – our ’51 Tailgaters are back in force…albeit in diminished numbers. This was the scene before the recent Air Force game.

Meanwhile, others have checked in with doings both old and new. Here’s a picture of our very own “Old Sea Captain,” Eric Nelson and some of his crew after surfacing in the North Atlantic in USS Harder (SS-568).

Finally, our Shipmate class column and this website could hardly have been kept going without the continuous and outstanding support of Barbara Crawford, especially when she stood in for Dan McGrew when he flew west. Here is a picture of Barbara's four daughters at her home in the State of Washington. 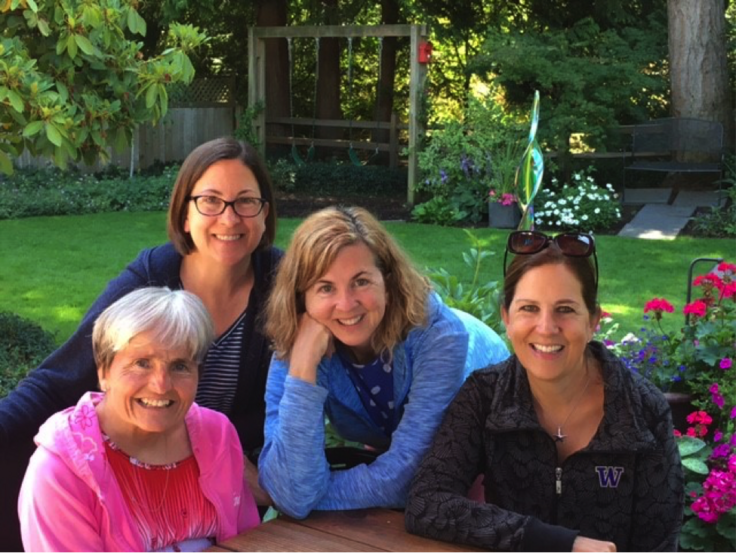 Our San Diego Area contingent continues to lead the way in class rendezvous. After a long pandemic pause, a luncheon was held at the Coronado Golf Course.  Attendees, pictured below were: Andy/Jean Kremm, Lee Bolt, Margaret/Herb Zoehrer, and John Redfield.

Don Haynsworth was unable to attend due to short hospital stay for Libby.

During the luncheon, the group paused in remembrance of Bill Weaver, Dick Seymour, and Will Surman – West Coast classmates who recently passed away.

Of significance, the photo was taken by Captain Rodger Welch, USN (Ret), USNA 1978; son of classmate Commander Clyde Welch, USN, who lost his life in the Oct 1966 fire aboard USS Oriskany. Clyde was at the time the Executive Officer of VA-164, an A4D Skyhawk squadron. (Rodger now works at the nearby Tailhook Association offices and often joins the San Diego group at their luncheons).

We all recall how at graduation we split into different “Unions.” Twenty-five percent donned Air Force Blue, one went into the Army, one did not get commissioned due physical problems, a few others went into the Supply Corps and the Civil Engineers and our foreign classmates returned to the services of their countries. Others of our classmates went into the Marine Corps. After Basic Training most went right into combat in Korea where they invariably distinguished themselves, the Class and the Corps. Here are most of them in a before combat group picture, “Way back when.”

On the subject of. “Way Back When,” one of the more impressive models in the Naval Academy Museum Class of ’51 Ship Model Collection is a replica model of the USS Hartford, well known as the flagship of Admiral at Mobile Bay and a ship with a history special to all Americans and especially to the Navy. Launched in 1858 she not only had a distinguished Civil War record she served in one capacity or another until she was finally lost in 1956 (five years after we graduated); 98 years of service in war and in peace to the Navy and the Nation.

During the Civil War she served as Admiral David Farragut’s flagship helping to take New Orleans in 1862, Vicksburg in 1863 and sailing into Mobile Bay in 1864. “Damn the torpedoes! Go Ahead!”

After the war she provided training and served as a receiving ship in both the Atlantic and Pacific. Then, as iron replaced wood and facing increasing obsolescence, she provided various services including office space and served as a receiving ship. When women first entered the Navy in 1917 it was in the offices aboard Hartford moored in Charleston where they first saw duty.

Post WWII numerous efforts were made to turn her into a museum ship but all fell short. Her last port was Norfolk where, in 1956, a pump hose parted and she filled with water and sank at the pier: a rather ignominious end for such a famous ship. Yet, she lives on: in “Our” Ship Model Display, as USS Hartford (SSN-768) and a variety of other artifacts scattered across the country. 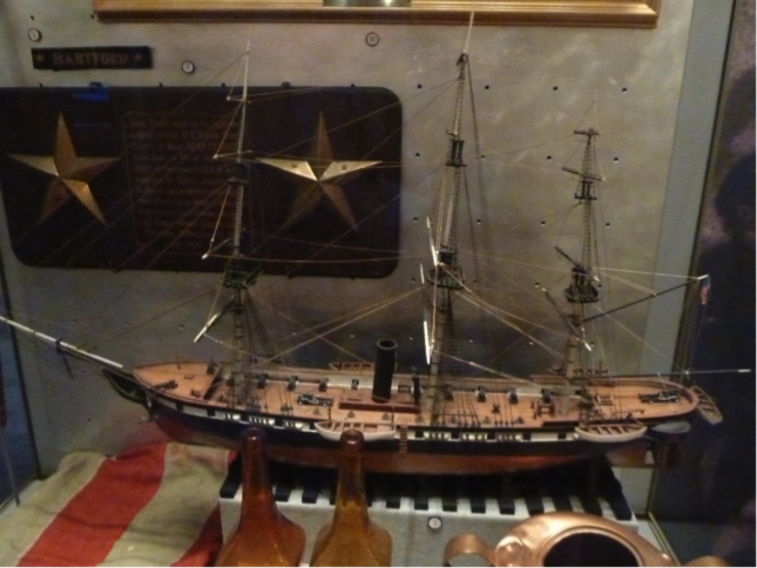 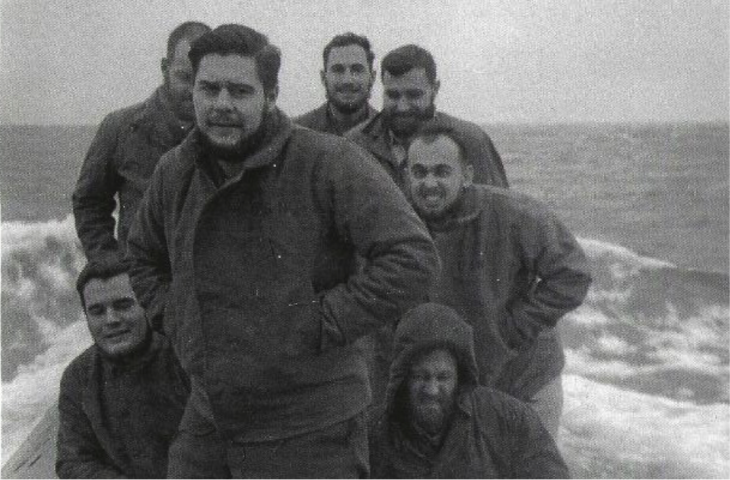 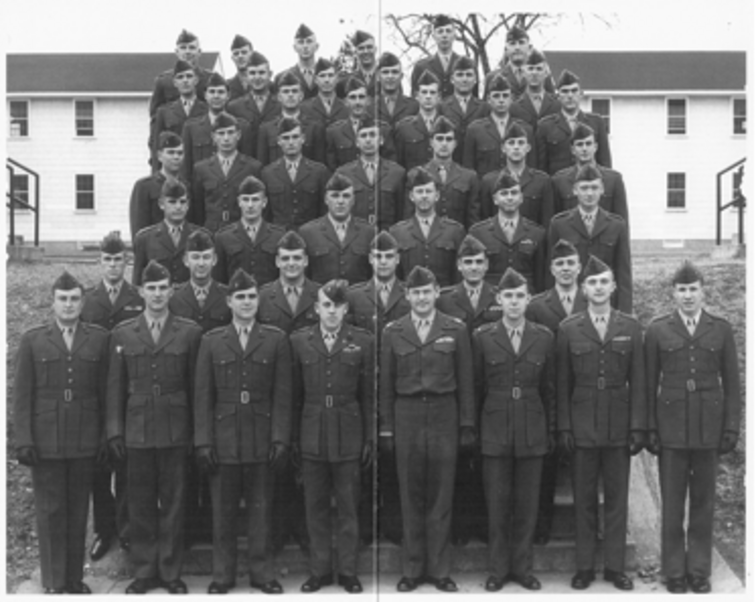 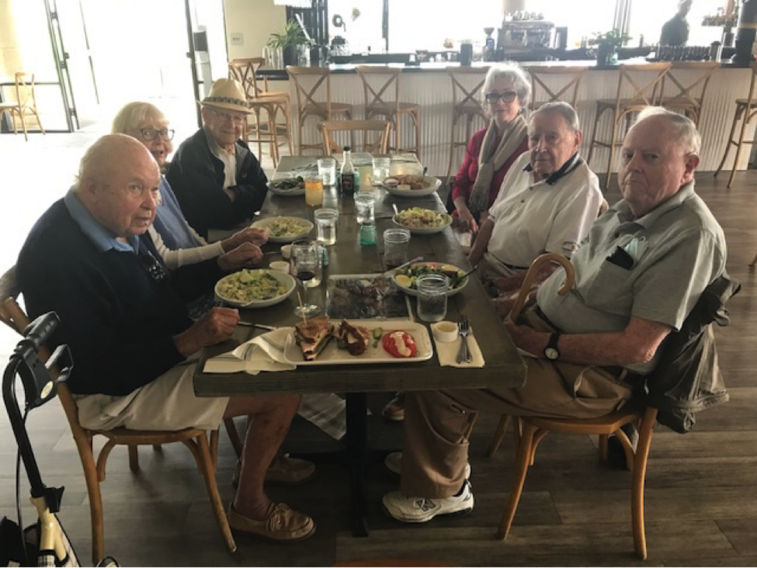